Looking back, being twenty-two seems a lifetime ago; the best years of one’s life, so they say – not for me though. I’d already been farming for seven years after one year at college. March is a busy time on the farm with lambing in full flow and ploughing to be done, but there was no need for extra help. I was as good as three men then, ploughing, cultivating, planting: I could do it all in my stride – what a buzz from it all – on the go from dawn till dusk, with still enough time to socialize. What extreme energy! I didn’t want it to stop, but everything must come to an end. I started analyzing myself too much: maybe I couldn’t do that; what if this happened or that; what if I couldn’t keep up with work; things were getting on top of me; I was getting upset for no reason. So I reasoned that maybe a few days at the local agricultural show would make me feel better. 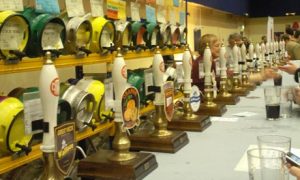 Alas, no, too much drinking and merriment. Yet arriving home I could not concentrate on doing anything, I had no enthusiasm, I just wanted to sleep and sleep. I kept telling myself that one day I would wake up and this nightmare would be over, every night praying to be better in the morning – but I never was.

I saw the doctor one day and he gave me an adrenalin injection. Wow, that did the trick, glad rags on and away, only to be met on the stairs by another doctor with a hypodermic to slow me down again – spoilsport! Soon I needed to go into hospital, but I did not understand: I had lost touch with reality; mind not functioning properly. I can remember two stocky ambulance men arriving at the house and trying to manhandle me out of bed – I hung onto it like my life depended on it. They left in defeat. What a shock for my parents the next day when I stood in front of them in the kitchen, holding a suitcase, ready to be admitted to hospital.

Walking in through the hospital doors was a relief – total shutdown, unable to speak and relying on other people to physically feed and wash me. I felt so thirsty but could not drink, so hungry but would rather starve, my mind continually telling me I would be drinking urine and eating vomit. But how nice it was to have my family around me: in the bed opposite was my father – he was always up first, brush and shaving foam in hand, always in that string vest. My brother in that white coat handing out tablets with a smile and a drink of water – why were they all here? Was this my new world?

I found a new machine, a milk dispenser – I can still taste it now, so white, fresh and cold it took away all that thirst. I was coming out of my nightmare – and wanted to phone my mum. What a shock that must have been to the male nurse I approached that I could talk again. How timely this was as the next day I was booked in for some ECT – which was stopped. Every day I gained strength and confidence and within three weeks I was discharged, but what a long road it was before I felt back to normal.

Cut to September 2001 and I was now a married forty-one-year-old man with two children. One night of excess ended in a violent confrontation with someone, resulting in me breaking his ribs. Where did that strength come from, fuelled by an immense pent-up feeling of exhilaration? I then grabbed the nearest object which happened to be a golf club, and attacked the nearest thing, which was a car – try explaining that to the insurance company. I then raced back home unaware that my wife had phoned the local constabulary. They arrived just as I was unpotting all the plants around the house.

I tried to get away but was too late and was tackled by a look-alike from the Welsh rugby squad who brought me down on a gravelled driveway. I was only wearing a shirt and it really hurt. I was now under control with handcuffs in place – they didn’t half hurt. I was now experiencing another frightening thing, namely hallucinations. As I was being driven to the police station I could see people’s faces changing into what I can only describe as the devil. Where were they taking me? Was it the place for all the bad people of the world?
Those cells are very small and claustrophobic. I remember jumping around and begging them not to shut the door, which they agreed to, and an officer guarded the door. Soon after that I was sectioned, and taken back to the hospital where I had been nineteen years previously. Surprisingly enough, there to greet me at the door was the person who I believed all those years ago was my brother. We recognized each other in an instant; not that mute dishevelled person from the last time we met, but a loud, boisterous, argumentative person who would not stop talking, jumping from one subject to another and unable to stand still. After much persuading I took Haloperidol and soon settled down. This drug is similar to a straitjacket and had the desired effects with my limbs soon feeling like lead and my tongue feeling the size of a cricket bat. I rapidly came back to reality and the remorse and embarrassment were now setting in.

The physiatrist saw me soon after and the words bipolar effective disorder were mentioned. At last there was a name for the illness that I had suffered from for many years. After release from hospital I was invited to a meeting with the Bipolar Organisation. From this about half a dozen of us set up a self-help group, and with our friendship and support and knowledge of the illness we have encouraged more people to join up, and we are now a strong and established group.

Although the staff were very supportive to me in hospital I felt that they did not have the insight into the illness that I had experienced at first hand. So I volunteered to visit the people that had been diagnosed with bipolar, to give them support and information on what can be described as a very disruptive illness. From doing this I feel I have gained a vast amount of knowledge and understanding about bipolar. I am sure that this has helped me cope personally with this illness that has plagued me for many years.

Although I am still farming, methods have changed considerably. Contractors now help me with ploughing and field preparation, so that we are ready for the new year’s crops. This helps me with labour because they usually have new up-to-date machinery to get the job done faster and more efficiently. As well as this, the farm is now in an environmental scheme. I receive payments for fencing both sides of hedges to protect and let the hedgerows regenerate into both food and shelter for wildlife; the farm has already benefited from a number of hares that now occupy the land, and a large flock of lapwings winter here which is quite a spectacle.

Suffering for many years with this illness has given me a greater understanding of what other people are going through, and it gives me immense pleasure and satisfaction visiting the local wards to give people encouragement and hope for the future. With the right medication and education there is no reason why people with this diagnosis cannot lead full and enjoyable lives.

Excerpt from ‘The A-Z Guide to Good Mental Health: You Don’t Have to Be Famous to Have Manic Depression’
Jeremy Thomas, 2008