There are those for whom the instinct for the horizontal life remains imutable….those for whom repose is the raison d’etre….the physically unchallenged….the apotheoses of the Type B personality. Whilst respecting the consequent disinterest in stress induction life has its own inexorable way of bringing it on….and one of methods of counteracting this is by moving. There was always something in that law of Isaac Newton’s, equal and opposite forces and all that, that implied a reaction was normal, rather than the absorption of stimulus into the adiposity of the soul.

Running down the front in Brighton at 7.30 on a cold January morning, the grey winter’s light yet to come, in the blustery south westerly periodically bringing with it squalls of rain I smiled at the thought of that as I felt a small slurry of seagull excrement coursing down my cheek. It brought back memories of rugby playing on the wing at the age of 14, in the arctic wind, the lack of passes, the lack of will to break the ice with a tackle, the pathetic crossing of arms to harbour warmth, the inefficacious swinging of arms to engender it in the first place through to the New Year’s plunge in the North Sea at 16, well-hung-over, nowhere else though, with the water half a mile out…all the imposed or self-imposed discipline and pain of youth…

It’s not that bad going to the gym, or going for a run or a bike ride or a game of football. Go to the gym first , then think if you must. It is a good lesson from the first parachute drop- jump in terror, and then feel the parachute open!

Aerobic exercise – whereby you get hot and sweaty and out of breath- is what you have to do if you are going to use this method of keeping depression and anxiety at bay and have a sense of well-being. It gets rid of the body’s toxins, the products of the flight and fight hormone adrenaline and causes release of one’s own endorphins (hormones that induce a sense of calm being types of opiate). Oxygenation of the body and mind. You may see in the mirror a slimmer body but you feel better and fitter, and, after a while you tire less. The pay off is good- you need less sleep, you work better and more efficiently, you get sick less and thus you save time (and we all desperately need that now don’t we?). 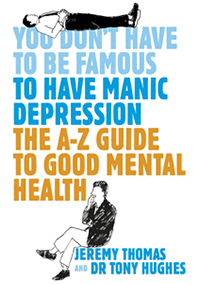 Exercise with others if you can but if you can’t don’t worry- it’s easier to arrange for one (though easier to get out of!). Run on your own or cycle on your own. Walking is better than nothing but if you’re not infirm go for something more vigorous- it works better. Do it when you’re well to stave off bouts of depression. Go during the most stressful times of your life.. it’s even more important then. Go during the divorce, the unemployment, the cancer, the outrageous office hours. There are studies that support the value of exercise, a well-known one was that of James Blumenthal published in 1999 in Archives of Internal Medicine. That was a comparison of exercise against antidepressants. If considering stopping antidepressants it is important to consider this with your doctor, as some people will have a much better response from antidepressants. A more recent study found benefit from both 3 and 5 times a week exercise. Don’t exercise if feverish but if one feels mildly unwell a work out improves the system.

Incorporate deep-breathing exercises. They re-oxygenate the system, open the lungs fully, massage the bowel, suffuse the brain. There are three areas of the lung to work on. Abdominal breathing can be practised by wrapping a towel tightly around the abdomen and forcing the abdominal wall against it. The diaphragm moves down and the abdomen protrudes more during inspiration. It is drawn in to exhale. These exercises are taught in martial arts, and are included in yoga and Tai Chi. The next is for the lateral chest wall and done by raising the arms to the sides (like chicken wings!), to create a bellows effect. The third is for the apex of the lung and can be achieved by short sharp breaths with the hand held clasped above the head.

Excerpt from ‘The A-Z Guide to Good Mental Health: You Don’t Have to Be Famous to Have Manic Depression’
Jeremy Thomas, 2008